[update] Good for them, the NFIB hits back, hard. No mental gymanstics required to correctly interpret what was said. Further they back it up with almost identical quotes from Elisabeth Warren herself, who appears to be the originator of this epic failure of a meme. This entire meme deserves all the derision being heaped on it. [update 2] And the pile on begins in earnest. James Pethokoukis (economics blogger and many other things) has some good comments of his own, as well as from others. His comment

I edited out the last two sentences. Not to remove context. To remove a personal slam against the president. Pethokoukas spoke to Senator Paul Ryan about this.

And papers in the UK noted the comments from the president.

Sonofagun. Lots of people saying the same exact thing I am (no I didn’t read it there first). It took me a long time to calm down enough to tear up what I had written (scathing rebuttals) and write something relatively innocuous. People get it. They really do. No amount of spin could fix this. Even an apology would ring hollow at this point … he doesn’t apologize, he doubles down. Even when he’s wrong. Gawd this is depressing. [update 3] The derision pile on is getting pretty intense. Oddly enough, we may have witnessed a defining moment in the campaign. Some of the better ones are here. And then there are the juxtapositional ones, of which this is a representative sample. 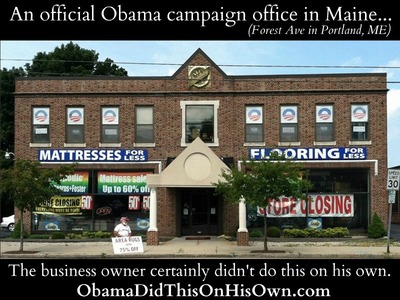 and of course, this is bleeding over into much of the rest of the history of the president. Happily, its gone from ugly into overt and sustained mocking. It appears that this president will finally be vetted, but sadly, will be done by people with an intention to deride and mock. Such is American politics these days. [update 4] … and its a campaign meme now …

I know some are trying very hard to spin this to be something its not. Reparsing, recontextualizing, and all that. But this meme exactly matches what the thought leaders on one side offer up as their “deep intellectual” views on the economy. The problem in the US is the poor economic recovery rate. The increased risk that we small businesses have to swallow due to less credit available for lenders to lend via Dodd-Frank, higher risks and costs associated with health care insurance via ACA, not to mention significant potential risk due to NLRB and the consumer protection board. Couple this with government chosen (via a political process) winners and losers (in terms of markets, market participants, …), and you get a sense of an incredible headwind we have to deal with. Only one of the two running for this office seems to grasp this. [update 5] ok … this is getting into self-instantiating parodying … its gone from aweful, to funny, to … well … there are now “truth teams” on the part of one of the candidates, and they have an advert out trying to defuse this stinker. Before we get there, you just knew the National Review magazine would eventually comment. And they did. And, as with the other critiques, its pretty damned devastating. The Obama response is spin and damage control … or attempted damage control. This is where it gets funny again, with a self instantiating parody.

What is the parody? Well, its they guy who says, and will say anything, is accusing his competitor of saying anything, when all the competitor does is accurately quote the guy, in context, about what he said. They did a pretty bad job of selectively editing this, as they make the competitors point … Its like calling someone a wild-eyed extremist for merely repeating and commenting on your words, spoken in the context they were in. Its either funny or depressing. Wow. I went from pissed, to disgusted, to amused, to annoyed, to amused again during this whole thread. [update 6] Oh crap … top front right of Drudge Report for this now …

Yuppers. Here’s what it shows:

The single best thing the president could do at this moment would be to apologize for his mistaken remarks. None of us would believe him, he is a student of Elizabeth Warren and others whom push this meme hard, and don’t grasp how wrong it is. But at least to do nothing else than admit a mistake, show he’s man enough to move on and learn from his mistake. This could go a long way for him if he chose to do this. But, I don’t think he’s built that way. Few politicians are. They aren’t wrong. They are misinterpreted. But attempting to spin what you obviously said, as something you didn’t? Thats not simply disingenuous, that is pathetic. And to add insult to injury, claiming that the person who merely mirrored EXACTLY what you said, in the context you said and meant it, mis-stated what you said, purposefully, in order to take a job you now hold? ‘Pathetic’ is the nicest word one can come up for this. There are many more that are far more accurate. Somehow, I don’t think this is the end of this … ——————— [ original below ] ——————- I’ve written and trashed two posts on this already. Here’s the article. I can think of only one response.

Summing up what we are seeing this nasty US presidential campaign season, one can only describe the incumbent’s campaign as a mixture of clueless, and desperate. Most of their memes are blowing up in their faces. Many of their allies are jumping ship or finding alternative places to be rather than seen in public with them. Their media partners are publishing hit pieces, which are strongly debunked, with even their party members taking them to task over, and yet are used by the incumbent’s campaign after the debunking. This is sad at so many levels, and it reeks of desperation. Those who understand their ship is sinking are shrieking madly, trying anything that they think will stick, to make the other ship sink faster. We also see the media largely ignoring analyses such as this. Kind of strange that they avoid discussing something like this. I’d expect this would be something interesting, with the possibility that commonalities exist that could be leveraged not just on the state scale, but nationally as well. I opined that the election season was going to be nasty, and I was right. And its just beginning.