[warning: longer post] I mentioned this on twitter (@sijoe). The day job has been in business for 10 years. We’ve not taken outside investment to date, and we’ve not sold the company yet. We’ve been profitable and growing continuously during our lifetime. The preceding 3 years have seen growth, accelerating hard. The company was built starting with a conviction that practitioners and users of HPC systems needed better designs, better systems than were being pushed out by traditional vendors in the early 2000’s. As beowulf systems took off, we saw some of the most egregious designs … 4 years ago, I wrote a post decrying some of these issues I had seen. And the points I raised rubbed a number of people the wrong way, as you can see in the comments. We started the company in part to make sure the high performance side was represented in these cluster systems. We haven’t always been successful in this endeavor. In the late 90’s, I had been an advocate within SGI for building and selling clusters. I pointed out benchmarks to colleagues whom had insisted that RISC machines would never lose in performance to CISC machines. Its very hard to explain away benchmarks that show otherwise. I had argued, in a very Clayton Christenson manner, that we should should creatively destroy our own products, lest our competitors do this for us. Which they did. The clustering effort at SGI was canceled when SGI exited the x86 market for the first time in 2001. I left within weeks of this, as I was convinced at that time, even though it was by no means certain, that Linux clusters would come to dominate HPC (for at least a while). I thought the management (then) at SGI had made a mistake. My failure at that time was not to wait for a layoff and take a severance package, so I could start this company. That was a mistake. Not a fatal one though. I had limited tolerance for risk at that moment, and felt I needed a larger company around me. 16 months later, having experienced what I needed to experience at another firm … I decided I needed to start this company, if for no other reason than to prove myself right. I spoke to my wife and we talked about the issues relative to our 1 year old. This was a huge risk. Monumental. I was putting out a shingle at the height of a recession. I was doing this 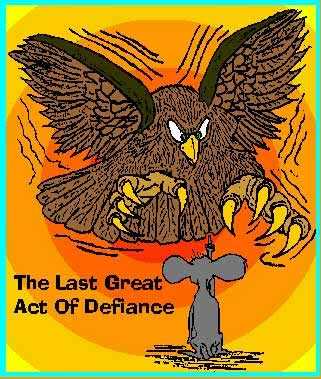 (a mouse “flipping the bird” to an bird … ) to the recession. We had our first customer in 15 days. Our second in 30 days after starting. Now here we are 3652 days later. Going from a skim over the water at slow speed, to 45 degree attack angle and full throttle about 5 years ago, then 60 degree attack angle and afterburners lighting off, pressing us back hard in our seats just a few years ago … to low earth orbit and warp cores spinning up now. Yeah, we built that.