Yes, actually we do. Too many. Turns out that little law of supply and demand does in fact hold true. The higher the demand for something in limited supply, the higher the price (wages) you will pay for it. By applying forces to this law, you impact a number of outcomes. That is, if you start monkeying around with the supply, sure, you can adjust the price you pay for the STEM. And, you get a whole host of other, well, I’ll call them unintended outcomes, by doing so. 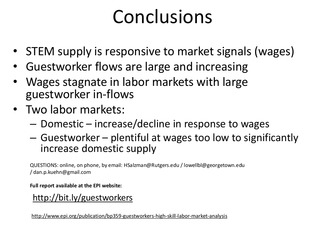 Please, read the whole thing. There are real consequences to quality of life, economic growth, etc. by flooding the country with guest workers that lower wages (merely by their presence in terms of basic supply and demand). Politicians that vote for this ought to be appropriately rewarded at their next election cycle, by flooding the market with competitors for their position, and making sure all are equally well likely to win by appropriate controls on campaign spending … you know … so that its “fair”. Don’t get me wrong, I am a huge believer in free markets. Companies should be free to hire whom they want. They should not be able to escape the downside of their choices, either through tax abatement usually offered to large companies to “win” them over to a particular location (another thing I am firmly opposed to), or other considerations which have the net effect of lowering the cost for their decisions. We the small businesses and other tax payers are the ones funding these perks. And you know those unintended consequences I alluded to? By artificially increasing the size of the work pool, you depress wages, and you diminish demand for the skills. Which means you get more outflow from these professions into others. If you do this long enough, you get fewer people in the US entering these professions, as they no longer see them as a path to professional fulfillment, happiness, etc. Which means if you want to grow, you now have no choice but to seek staff outside of the borders. And as competition for that staff from other developing nations heats up, what do you think will happen to the price of those workers? Its not rocket science folks. This is basic economics. Policy should be concerned with the long term, lasting effects, of enabling such things to occur, upon the basic fabric of our economy. The US has done a good job of out competing, in large part, due to a large and growing native and recent immigrant STEM population taking risks and creating opportunities. Flooding us with more workers to keep STEM salaries low by increasing the supply side makes no sense in the long term, and will do nothing but hurt us. I should point out that this simply appears to be a resuscitation of The Myth(tm) that people like me heard just before we made critical decisions about our future.

Doesn’t that sound familiar? FWIW, I finished undergrad in 1987 and was attempting to figure out what I wanted to do when I grew up. I distinctly remember a colloquium speaker from the NSF or similar exhorting all of us young’uns to go on to grad school and get Ph.D.’s as there were jobs by the thousands waiting for us. We had smaller meetings with these speakers who promised us these breathlessly wonderful futures. Note to all future generations: When someone promises you something like this, know that they are either a) stupid, b) have an agenda and are lying to you on purpose, or c) some combination thereof. If you don’t know what TANSTAAFL means, go read the original book. When I finished up, looking at academic positions, postdocs (in physics) were paying below poverty wages, and tenure track positions were receiving high several hundred applications per opening. One university had anecdotally reported well over 1000 applications for a single assistant professor position. Doesn’t sound like a shortage of applicants scenario to me, but then I’m one of them thar gullible types that originally believed the NSF folks. I mean, why on earth would they lie? Yeah, I eventually shed my naivete. Its a liberating moment when you realize that you fell hook, line, and sinker for this pablum. You tend not to want to fall for things again, so your BS meter goes to high sensitivity, and your skepticism goes through the roof. I’ve heard “shortage of STEM workers” in the news for a few years now. No, we really don’t have such a shortage. Not even close. Nothing wrong with educating more, but be very honest about the state of the market. No more BS promises from government types. And no flooding the market with guest workers. This works against all of our interests in the long term.