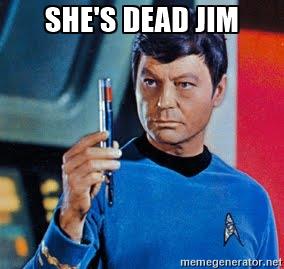 This is the post an entrepreneur hopes to never write. They pour their energy, their time, their resources, their love into their baby. Trying to make her live, trying to make her grow. And for a while, she seems to. Everything is hitting the right way, 12+ years of uninterrupted growth and profitable operation as an entirely bootstrapped company. Market leading … no … dominating … from the metrics customers tell you are important … position. And then you get big enough to be visible. And you realize you need more capital to grow faster. And you can’t get it, because, well … Detroit? 12 years of operations and you aren’t google sized? Then you try to find capital. You go through many paths. One group complains that Pure storage is younger than you so you should be bigger than them, and you have a serious case of WTF. Another sets up what looks to be an awesome deal, until they demand all your IP for free forever, to do whatever they want with. Then another group … . VCs tell you things, you pitch them, and they can’t get to yes* Well, lets just say this is the non-fun side of things. Or when you go visit customers, they love your product, the benchmark results are mind blowing … and then the CIO/CFO kills the deal because, you know … _you are too small_. And then, while you are talking to potential acquirers, your bank holding your LOC decides to blow you up. In the middle of the conversation. Literally. Did I mention that this was the non-fun side of things? You realize that while you may have been able to pull rabbits out of hats for the last 14 years, that you just hit a perfect storm. A veritable cartoon buzzsaw from which there really was no escape. Your baby … the one you put so much energy, time, personal money into. Your baby was dying. And there was little you could do to stop it. There is a surreal quality to this. One not well captured in words. Not unlike an observer in a different temporal reference frame (e.g. you clock is running at a different speed), while all around you things are happening in real time. There are the 5 stages of grief and coping. You reflect on what you started, on what you contributed to. Small sampling would be defining and using the APU term for AMD, building tightly coupled computing and storage systems before hyperconvergence was a thing, designing accelerators and a whole market/sales plan before GPGPU was a thing, getting major customers signed up to a grid concept before there was a grid, and more than a year before there was AWS. You reflect on your failures, or things you failed at. Raising capital in 2002-2006 to build accelerators. Raising capital in 2004-2006 to build a cloud. Raising capital in 2008 to build extreme density machines. Raising capital in 2011-2013 to build tightly coupled systems. Raising capital in 2014-2016 to build appliances. You reflect on your successes. A small sampling: Taking a business from zero to multiple million dollar revenue without external investment (though I did try to get it). Setting very hard to beat benchmark numbers by designing/building the best architecture in market. Solving significant automation, support problems with better implementations, and skipping broken subsystems. We’ve had people offer to “buy” us. For free. Come work for us, they said, and maybe, maybe we’ll pay you. Others have asked the amount on our LOC and tried to lowball even that. I’ve spoken with companies that claim we have nothing of value to offer, then moments later offer to bring me on in “any capacity.” I’ve been told “name my position” many times. The mental disconnect required for people to make these contradictory statements is absolutely staggering. You go through this “woulda, coulda, shoulda” thing. You think through all of it. How, if only, X had happened, then Y. You look for where you messed up. And realize that as hard as you are trying to blame yourself for this, you weren’t the only actor in the saga, that the other actors also had choices. You can argue that they made poor choices (and fundamentally, the number of phone calls you’ve fielded from people regretting the choices they’ve made which have involved buying “competitive” systems versus yours … this is the very definition of opportunity cost). I’ve learned how to pull rabbits out of hats. I always knew there was a finite supply of rabbits and hats. And someday, I would not be able to do that anymore. Going through this in your mind, you wonder, could you have found another rabbit to pull out of another hat. And then you realize that you couldn’t have. That day happened. The hats, and rabbits, were gone. This has been a ride. A wild ride. A fun, fantastic, terrifying, gut wrenching, stomach turning, frustrating, frightening ride. This has been a humbling experience. I’ve learned a tremendous amount, about human nature, the nature of risk, the nature of competition, how people make decisions, and so forth. I’ve learned how hard you have to work to get customers to buy. How much effort you have to undertake. How much pain you have to absorb, smiling, while you deal with failures you have nothing to do with, but still fall … upon … you. So here we are. At the end of the process. Life support has been removed. We are just waiting for the rest of nature to take its course. Selling off the assets, IP, brands. joe.landman at the google mail thingy if you want to talk.